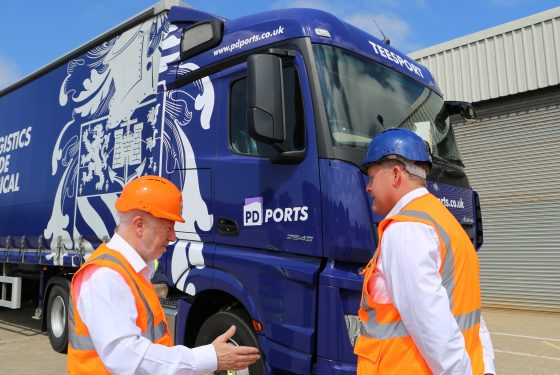 As a Member of Parliament for Middlesbrough since 2012, Mr McDonald is a strong supporter of Teesport, one of the UK’s deepest water ports, which has seen over £1BN of major infrastructure investments in the last decade.

“Teesport is a hugely important piece of infrastructure for the UK and I’ve made it my business since becoming a Member of Parliament for that to be reflected in national thinking,” commented Mr McDonald.

The visit, hosted by PD Ports’ Portcentric Logistics Director and former Road Haulage Association Chairman, Jim French MBE, was an opportunity to raise serious concerns about the future of the logistics industry. Mr French highlighted the chronic shortage of road haulage drivers and the image crisis badly affecting the numbers of young people wanting to embark on a career in the industry.

Mr French, who recently received at MBE for his services to young people in the transport industry, stressed that with an average driver age of 53 years old and an existing driver shortage that stands at 45,000 more needs doing to focus on the future and safeguard the UK’s ability to remain competitive in this vital industry.

“For the last four years we have aggressively pushed to raise the visibility of the logistics industry amongst young people and demonstrate the many career opportunities available to them spanning a broad range of job roles and skill sets. This led to the launch of the Tees Valley Logistics Academy run with our colleagues at Stockton Riverside College and supported by national charity Career Ready and Think Logistics; focussing on inspiring young people to explore the logistics sector as a viable and valuable career choice.

“Despite road haulage accounting for 76% of UK freight distribution and the industry as a whole contributing around £121BN to UK GDP, supporting over 2.5 million jobs, there remains a distinct lack of visibility both within government and amongst the public as to the vital importance of the logistics industry to UK trade.”

Andy McDonald MP commented on the work PD Ports is undertaking to tackle this skills shortage: “I’ve been hearing today about initiatives including the Logistics Academy and it’s abundantly clear that the industry and PD Ports, in particular, are really focused on the deficits in bringing people into the industry and making careers in logistics a realistic offer for people.

“I’m excited about the programmes I’ve been hearing about and I think if people can see the opportunities the industry has available then they would be attracted to it. It’s a question then of retaining them in the industry and letting them progress their careers as they develop.

“It’s a really exciting agenda but it’s critical as the logistics sector is so absolutely fundamental to everything we do in this country. If we don’t address the shortage we’ve got a real problem, so it’s a question of urgency as well. Today has really sharpened by focus and I want to carry on the conversation.”

During his visit, Mr McDonald toured PD Ports’ state-of-the-art warehousing facility where global tea and coffee imports for long-standing customer and one of the UK’s most respected tea and coffee merchants, Taylors of Harrogate are handled.