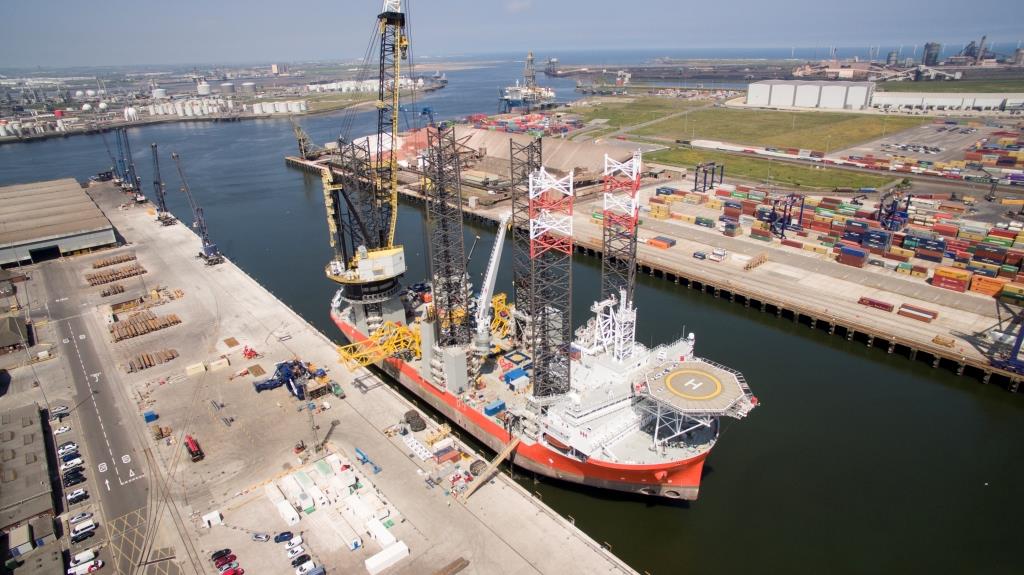 PD Ports has welcomed one of the biggest wind farm installation vessels in the world, Pacific Orca, to its newly redeveloped £35 million quay at Teesport.

Measuring a massive 161m long and 49m wide, she will be berthed at Number One Quay for several weeks while being fitted with a pile gripper that has been constructed on site.

The 550m long quay which measures 14.5m deep has been significantly strengthened so can now take loads of 10 tonnes per square metre, therefore making it suitable for the mobilisation of wind farm installation vessels.

David Robinson, PD Ports’ CEO said attracting a vessel as renowned as Pacific Orca illustrated the first-class facilities Teesport had to offer. “Pacific Orca is a sight to behold. Our Number One Quay has only just been declared open for business and one of the biggest wind farm installation vessels in the world is berthed there already.

“We have just invested £35 million in our quay to ensure it can meet customer demands. It demonstrates our capabilities and we are excited about future projects it will deliver.”

Funding to upgrade the quay was secured through the Regional Growth Fund and the application was supported by Tees Valley Unlimited.

Pacific Orca is the second supersized vessel to sail into Teesport in recent weeks following a visit by the Jumbo Javelin, a heavy lift vessel with two 900 tonne cranes. It was involved in moving wind turbine transition pieces by overside transfer.

Following her inaugural visit to Teesport, the self-elevating Pacific Orca will sail down the east coast to the English Channel. Owned by Swire Pacific Offshore, she has been engaged to work on the Rampion Offshore Wind Farm project located 13km due south of Brighton, where she will help position wind turbine piles into the seabed.

The vessel has a load-bearing capacity of 12.8 tonnes and can withstand extreme weather and sea conditions. It can be floated up to 56ft above the surface of the water using its six jack-up legs each measuring 345ft in length.