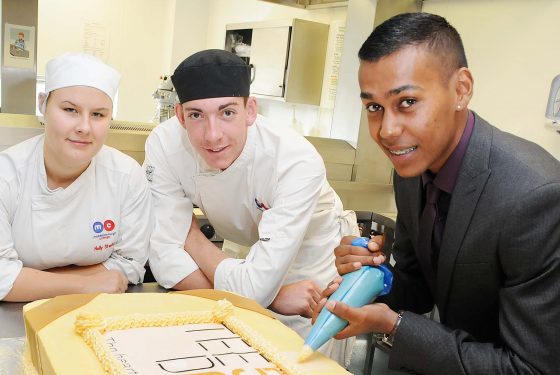 Collaboration between PD Ports and Middlesbrough College was the icing on the cake at the port operator’s 50th anniversary celebrations this week. (October 3).

PD Ports commissioned Middlesbrough College to bake an anniversary cake for 300 people, which was served at the port operator’s annual stakeholder event on Thursday – along with 500 cupcakes for an anniversary family fun day on Saturday. (October 5)

This latest collaboration highlights the strong relationship the College has developed with PD Ports since the two joined forces in 2011 to deliver a set of training programmes for more than 70 port employees.

“Since opening in 1963 with just two cranes and a warehouse, our business has grown to become an international logistics hub handling goods from all over the world.

“Our people are at the heart of our success, so it is vital for the longevity of our business that we invest in their growth and development.

“Working closely with Middlesbrough College has enabled us to deliver quality training programmes tailored to the specific needs of our business.

“Our ultimate aim is to engage with the wider industrial community on Teesside to collaborate on issues such as training and skills, and deliver greater prospects of work, employability and skills development in the area.”

Zoe Lewis, Middlesbrough College Principal and Chief Executive, said: “We were thrilled to be asked to make the centrepiece for PD Ports’ celebrations – it’s testament to the skill and professionalism of our students, and working on projects of this size ensures our students are work ready when they complete their studies.”

Today Tees Dock employs 650 and sees over 5,000 vessel calls each year, bringing millions of tonnes of container, ro-ro, steel and bulk cargoes over its quays.

The extraordinary journey the port has taken over the last 50 years has included changes in ownership, people, operations and procedures. Yet throughout, Tees Dock has remained a major asset to the local and national economies.