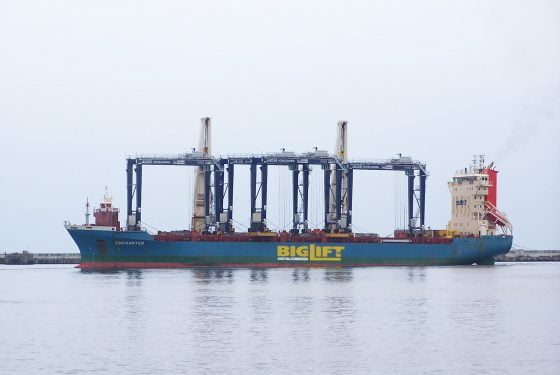 The four new rubber-tyred gantry cranes delivered to Teesport this week, represent the biggest single equipment investment in the port since the container terminal opened in 2003.

The Konecranes RTGs, manufactured in Finland and Poland for a total investment of around £5 million, are the first of their type to be supplied by Konecranes in the UK and will allow PD Ports to significantly improve handling capacity on the Teesport Container Terminal as volumes continue to grow. It is a key component of the company’s £16.7 million expansion.

“By switching from the current handling system using reachstackers to these RTGs we can store many more boxes on the same area, due to their ability to create higher, wider container stacks,” says Mark Pearson, PD Ports Project Director. “They also improve the number of containers handled per hour.” The 16-wheel RTGs have a lifting capacity of 50 tonnes and can stack 1-over-5 containers high and 6 plus truck lane wide.

Teesport’s container terminals saw volumes increase by 45% in 2010 and capacity is currently being expanded from 235,000 TEU* to 450,000 TEU. The Company’s overall strategy is to expand port wide capacity to at least 650,000 TEU so further improving employment security for the current 500+ Teesport employees, and potentially creating new opportunities for additional employment, especially important at a time when the local and national economies remain under serious pressure to create jobs.

The RTGs, which were purchased after a rigorous selection process, are fitted with the latest Konecranes fuel saving system and have been designed to take future environmental requirements into account, including switching from diesel to electric power.

The cranes are also equipped with the latest GPS-assisted technology for container yards. This includes the autosteering feature, which keeps the crane on a pre-programmed straight driving path, thus improving safety and increasing productivity.

Mr Pearson says the operators will go through a full training programme and he expects the RTGs to be in full operation by the end of September.