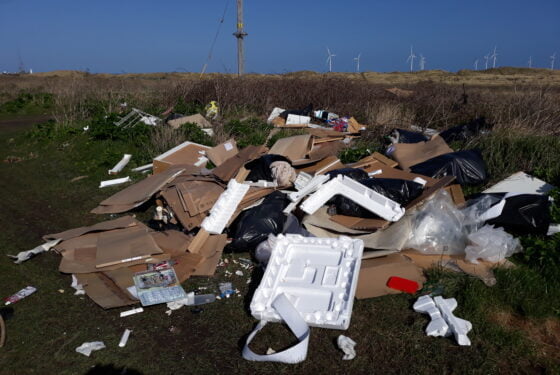 Working in partnership with Redcar and Cleveland Borough Council, PD Ports has vowed to do all it can to support the council in tackling the issue of people persistently dumping commercial and domestic waste.

PD Ports, land owners at South Gare and Statutory Harbour Authority for the River Tees, has invested in state-of-the-art CCTV equipment which will provide 24 hour surveillance, assisting Redcar and Cleveland Borough Council in bringing those responsible to justice.

Frans Calje, PD Ports’ CEO, said: “Fly-tipping is a criminal offence and detrimental to both people’s health, the environment and our local landscape. It is important to reinforce that the area at South Gare is private land. Access to the public is strictly prohibited and restricted to those with a legal right and employees of PD Ports. In recent months we have arranged for numerous clean-up operations to remove commercial and domestic waste including fridges, TVs, tyres and sofas; dumped by inconsiderate individuals.

“We have recently invested in new CCTV equipment which will assist the Council in catching those responsible and act as a deterrent to anyone considering dumping commercial and domestic waste on and around South Gare.

“We are incredibly fortunate to live in a region with an abundance of stunning countryside and coastal beauty and for the majority of local people, there is a huge sense of pride in preserving that natural landscape. We all have a duty to look after our environment and it is incredibly disheartening to see the inconsiderate and reckless actions of some individuals.”

Following investigation in to the recent spike in fly-tipping around South Gare, Redcar and Cleveland Borough Council has already taken action against a number of individuals issuing on the spot fines of £400. Persistent offenders can expect to receive much higher fines and the possibility of a prison sentence if convicted.

Councillor Barry Hunt, Cabinet Member for Neighbourhoods and Environment, said: “Our residents, visitors, landowners and all our businesses deserve to have clean and pleasant surroundings free from illegal fly-tipping.

“We will continue work with our partners and landowners, including PD Ports, to bring these criminal fly-tippers to justice and very much welcome these CCTV cameras from PD Ports which will help protect the environment along our great river. Our officers have had a lot of success recently catching people dumping commercial and domestic waste illegally. Fly-tippers be warned – you will be caught and fined.”