Commendations for members of the Harbour Police team

It was a day of celebration on Monday 3rd August as our CEO, Frans Calje, presented members of the Harbour Police team with awards that recognised both their individual performances and collective contributions to the force.

The socially distanced ceremony saw three members of our Harbour Police commended for their productivity and dedication, particularly over the past few months.

PC Kathleen Sykes was the star of the day as she received a special Police Constables Commendation from Cleveland Police, presented to her by Frans on their behalf. 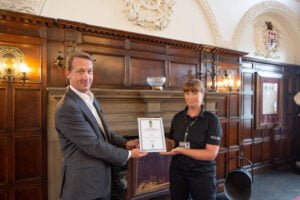 Alongside PC Sykes, Acting Sargent Mark Savage and PC Paul Cowling also received awards as each of them were recognised for their contributions to developing the vision of the Harbour Police through their individual performances and productivity.

Acting Sargent Savage, who has completed over 10 years’ of service, said, “I’m delighted to have been recognised for my role within the PD Ports Harbour Police Force. I love the variety of work that my role involves, especially dealing with people from all walks of life.”

PD Ports’ Head of Security and Policing, Neal Armstrong said, “On Monday, I was very proud to put forward three Harbour Police constables to be recognised individually for their contributions to developing the vision of the Harbour Police, through their performance and productivity.

“This recognition of their professionalism and dedication is a reflection of the wider security and policing function and the safety and security that they provide”.

Congratulations to Kathleen, Paul and Mark – keep up the good work!