It was a day of celebration on Tuesday November 5, as our CEO Frans Calje hosted our Long Service Awards in the QS boardroom. The ceremony commended members of our team who have been at the heart of PD Ports for many years, with one recipient truly keeping business in the family.

Martin Callaghan, Allocations Manager at the Teesport Containers Terminal, started working for us over 40 years ago in March 1979. On his 18th birthday, a week before the Middlesbrough Dock closed, he was transferred to Tees Dock where he met his wife Gill, who used to work in our finance department. Proving that family really does stick together, Martin and Gill’s two children, Liam and Melissa, also worked at our Teesport site for 8 and 3 years respectively. 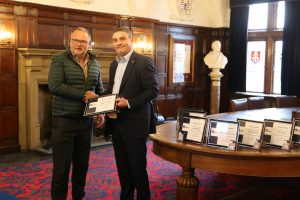 Also celebrating a 40-year stint was Rodney Thompson, who joined us in February 1979 and currently serves as Pilot Boat Skipper in Conservancy. 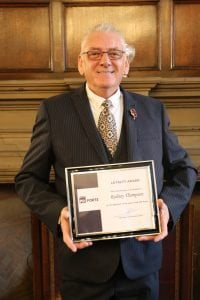 Rodney Thompson with his award.

Our Long Service Award recipients have all been highly praised by their colleagues for their fantastic commitment, work ethic, and the role each has played in our successes.

Our team is at the heart of everything we do, and the awards gave us a fantastic opportunity to say a well-deserved ‘thank you’ to those who have stayed with us over the years.

Speaing at Tuesday’s event, Frans said: “I believe that a business is a constituent of people that exist within it, with a shared understanding of responsibility and care for the wider picture.

“That encompasses all of these fantastic long service award winners who we owe great thanks, which is why we hold events to pay tribute and celebrate their time here with PD Ports”.