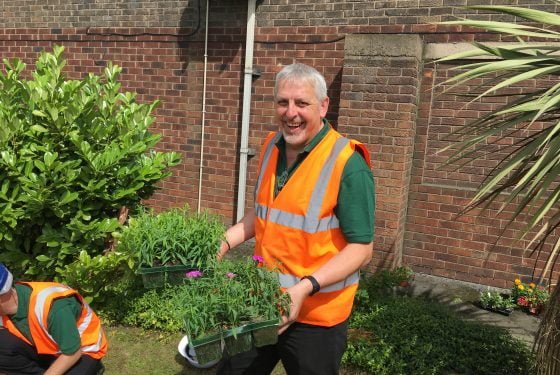 We held our first Green Week across all of our 13 nationwide locations, hosting a variety of green-themed activities such as planting wildflowers, conducting beach clean-ups, car-sharing and creating planters from old hard hats.

The initiative was the idea of our Environmental Champions, who are responsible for ensuring we continue to improve our commitment to sustainability.

Chief executive Frans Calje said: “It’s vitally important for us to not just protect and preserve, but significantly enhance, our local environment for future generations.”

Volunteers from across the business, including site and office staff, as well as managers from the Groveport base on the River Trent, took part in a beach clean-up at Cleethorpes, collecting over 10 bags of rubbish, as well as making hanging baskets, putting up bird feeders and boxes, and even running a ‘switch off’ campaign for all electricals in the office.

Brian Watson, Vehicle Maintenance Controller said: “Due to a mandatory change in hard hats worn on site when they had reached their five-year lifespan, we wanted to make use of those that were replaced.

“As they cannot be recycled due to the complexity of the plastic, we reused them by filling them with flowers and hanging them around the site. Not only do the quirky planters add colour to the site, they also act as a reminder of how items can be repurposed and not sent to landfill.”

We’re now looking to incorporate regular ‘green’ activities for the team at Groveport, including planting wildflowers, hanging more feeders and building a bug hotel, as well as using more sustainable methods of transport such as car-sharing and cycling.

Mr Calje added: “Making a positive contribution to the communities in which we operate is fundamental to the way in which we do business.

“The activities that took place will benefit the wider community and this is hugely important to our philosophy at PD Ports that what we do makes us who we are. The turnout across the business was hugely impressive and helped to not only raise environmental awareness but encourage teamwork and boost morale.”