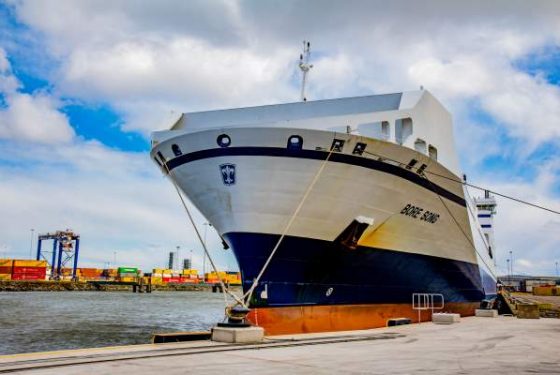 P&O FERRIES today announces that it plans to lift capacity on its Zeebrugge-Teesport route by almost 25 per cent within the next month in order to create a gateway to Scotland via the north-eastern port.

The integrated ferry and logistics company currently carries more than 100,000 freight units a year to Teesport from its continental hub at Zeebrugge. The 12 sailings a week service is provided by the 25,000 ton Bore Song and the 10,000 ton Mistral.

Customers will benefit from P&O Ferries’ plans to increase the capacity of its ships combined with the introduction by PD Ports of a new rail service to Mossend in Scotland. The timetable of both services will be fully integrated so that freight can be moved from one to the other with minimal delay.

Janette Bell, Chief Executive of P&O Ferries, said: “The most reliable way for exporters to or from Scotland to transport their goods is via Teesport. The 15 hour sailing is more cost efficient than more northerly routes and by integrating our timetable with PD Ports’ new rail service to Scotland we can guarantee customers an unrivalled service to and from northern Britain.”

Frans Calje, Chief Executive of PD Ports, added: “PD Ports is at the centre of an increasingly important logistics hub based at Teesport. We have a strong and historic partnership with P&O Ferries and we are supporting this expansion by providing additional capacity for their upsized Zeebrugge-Teesport route through even more investment in our rail services to Scotland. PD Ports has extensive rail capacity with direct intermodal links across the UK and with a new, second planned daily service to Scotland imminent, we will shortly see further opportunities for cargo movements to and from Scotland.”

Pieter Balcaen, Chief Executive of ECS & 2XL (European Logistics Group), added: “Our mission is to create sustainable and reliable logistics, which means that we focus on sustainable transport and multi-modal solutions to add value to our customers. The Teesport Rail initiative started three years ago, with a reliable level of service from day one. The increased ferry and rail capacity will enable us to further develop and strengthen our rail connections to/from Scotland – this is vitally important for our intermodal solution for our two products: Commodity Full Loads or one step beyond Supply Chain Solutions.”

Together with its logistics division, P&O Ferrymasters, the company also operates integrated road and rail links to countries across the continent including Italy, Poland, Germany, Spain and Romania. P&O Ferrymasters also owns a rail terminal in the Romanian city of Oradea, which facilitates the onward movement of goods to Britain from Asian countries via the Silk Road.