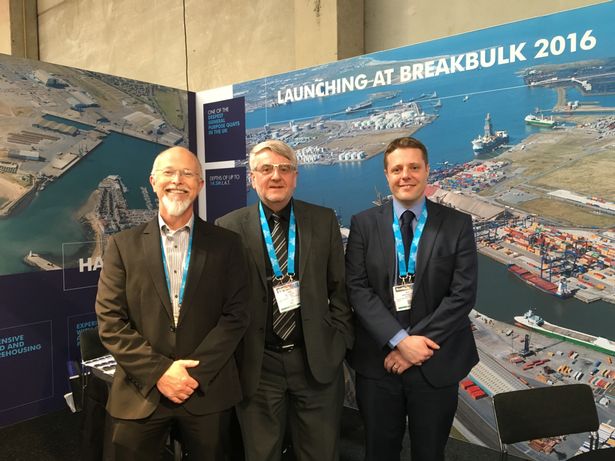 The award-winning ports and logistics company now owns and operates some of the deepest general cargo berths in the UK offering global customers an enviable freight advantage.

A topping off ceremony was conducted by Lord Heseltine earlier this year but Number One Quay is being officially unveiled at Breakbulk Europe this week.

One of its many advantages is the ability to take bigger vessels – both for import and export – therefore driving down freight costs for customers.

The quay design also has the capacity to further deepen the berth pockets in the future as customer requirements dictate and crucially, rail links to the quay edge and substantial warehousing on site have been maintained.

Roy Merryweather, PD Ports’ General Manager Business Development, said: “The new quay is vital to attracting new business to the port and North-East region, providing a platform to enable Teesport to compete on a national level.

This week, Roy is with other key members of the commercial team on Stand 1006 Hall 4 at Breakbulk Europe in Antwerp, the largest exhibition and educational forum in the world addressing the needs of traditional breakbulk and project cargo logistics professionals.

Number One Quay, which was originally constructed in the early 1960s, had reached its capacity in terms of the size of fully laden ships which could be handled as well as the demands of modern cranes and handling equipment.

The 18-month project involved the demolition of some 24,000 tonnes of the existing concrete quay deck with a similar amount of new concrete used in the reconstruction. Where possible the original concrete was crushed and re-used in the new structure. In addition around 10,000m of 1.3m diameter heavy duty steel tubes were used for the supporting piles.

Dredging of the berth pockets was carried out by one of the largest backhoe dredgers in the world, the Manu Pekka, operated by Boskalis Westminster with up to 260,000m3 of material being removed for disposal at sea.

Another advantage of the new quay is it opens up opportunities in new sectors, enabling the mobilisation and demobilisation of a lot more deep sea bulk cargoes from all over the world.

As well as the increased depth, the new quay deck is designed with a much higher loading capacity to take the loads from modern handling equipment including the existing Mobile Harbour Cranes.

“The reconstruction of Number One Quay gives us a tremendous platform to grow our business while increasing its lifespan for another 70 to 80 years,” said Mark Pearson, PD Ports’ Project Director.

“We are pleased to have secured funding through the Regional Growth Fund to help deliver this project for which our application was supported by Tees Valley Unlimited.

“These works are an important addition to our wider growth plans at Teesport and its pivotal role in driving government plans to rebalance trade through the Northern Powerhouse movement. Ultimately this will provide more direct and efficient routes to market for Northern importers and exporters.”

He added: “Ships are getting bigger and carrying more cargo so our improved facilities give customers a freight advantage. We are ensuring that Teesport has the right infrastructure and equipment to encourage and support future growth for PD Ports and our customers.”