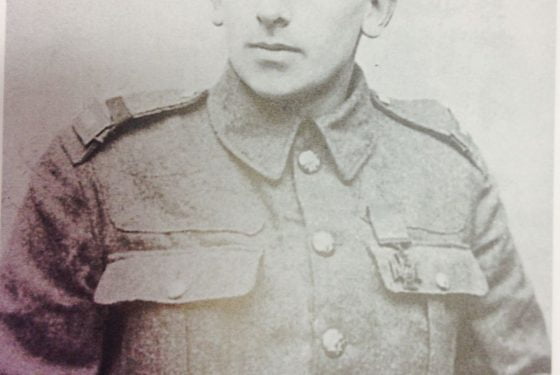 A FUNDRAISING campaign has been launched by PD Ports’ Engineering Manager, Brian Dresser, to erect a statue in honour of his grandfather Private Tom Dresser, the first person to be awarded the Victoria Cross in Middlesbrough.

A target of £50,000 and a tight 12-month deadline has been set for the ambitious project which would see a life-size bronze sculpture unveiled a century after the First World War soldier cheated death whilst crossing no man’s land twice to safely deliver crucial messages between his superiors.

The fund which has been kick-started by donations from PD Ports and parent company Brookfield as well others including the Port Users Association, Middlesbrough & Teesside Philanthropic Foundation and the proceeds from a gala cabaret. Brian is hoping to inspire other local businesses to get involved and help recognise the outstanding bravery of a true local hero.

Tom’s valiant act took place on the morning of May 12, 1917, just hours after the 7th Yorkshire Howards Regiment has captured Cupid Trench near Roeux in northern France. It had suffered heavy casualties from enemy machine gun fire as they’d been spotted just before the attack and now ammunition was running perilously low.

Communication between the front line and the headquarters had totally broken down so Company commander Captain Groom desperately needed someone to go back to battalion hq to bring more bombs. He asked for a volunteer and 25-year-old Private Dresser put his hand up.

He quickly scribbled a message and gave it to Tom who clambered over the parapet and ran back across the exposed open ground to deliver a precious piece of paper. Once he had safely handed it over he then headed back, accompanied by two men loaded with Mills bombs with another vitally important message ordering Captain Groom to hold his position as reinforcements were on their way.

But just 50 yards from reaching their trench they came under sniper fire and Private Dresser was shot in the shoulder. Remembering his note he took it from his coat pocket and tied it to the identity tags hanging round his neck. Later his said: “I thought that if I was killed someone would notice the message and bring it to the front line.”

With shells exploding around him and under the watchful eye of the German machine gunners, he crawled and staggered across no man’s land, picking himself up again after suffering a glancing blow by a bullet to the chin. Muscling up every last ounce of energy he threw himself into the trench and pointed at the muddied scroll hanging around his neck.

Fewer than three months after his incredibly daring mission amidst the horrors of war he was standing in the courtyard at Buckingham Palace with his arm in a sling being presented with the highest military decoration awarded for bravery by King George.

And at home he was given a hero’s welcome – he was treated to a civic reception and stepped out onto the balcony at Middlesbrough Town Hall to be greeted by cheering crowds and a rousing brass band.

Following the First World War Tom returned to his job at Dorman Long Steel Works until he took over his father’s newsagency on Marton Road, Middlesbrough which he ran for 40 years.

Married to Teresa and with four sons, he kept his VC and ribbon in a tobacco tin behind the counter and was always willing to show it to anyone who asked, and even letting a 10-year-old Brian take it to school in his pocket to show his captivated classmates.

Brian remembers his grandfather as a shy, unassuming man who rarely spoke about his wartime experiences. “He was born on a farm in Pickering and then moved to Middlesbrough as a young boy. The first time he would have left the town was when he went to France, he was sent to the Somme with his brother who was killed within the month.

“To see carnage on that level is indescribable but he was happy to show people his medal. We are just so proud of him,” said Brian whose family now treasures a replica version of the VC whilst the original can be admired by all in the Green Howards Regimental Museum in Richmond

Tom though isn’t the first famous Dresser in the town, he is a relative of the feted Christopher Dresser who designed Linthorpe Pottery which produced over 2,000 different shapes of ceramicware during its short 10 year life during the nineteenth century and is sought after across the world. At the Dorman Museum there is an exhibition celebrating his work as well as a café named after him.

Brian and his family are in discussions with Middlesbrough Council about a suitable location for a memorial and are keen that it is located near the Cenotaph and the nearby museum which is so closely associated with his ancestor.

When he died three days after his 90th birthday in 1982, Tom was given a full military funeral by the Green Howards Regiment. Last July he finally had his name added to the headstone of his wife in Thorntree Cemetery after it was originally missed off due to IRA security concerns at the time. Tom’s family worked closely with the Green Howards Regimental Association on the grave refurbishment which led to talks about a erecting a statue in his memory.

The life-sized bronze sculpture will be designed by Brian Alabaster the same artist who created the figure of Teesside’s other VC hero, Second World War veteran Stan Hollis which stands near the cenotaph outside the gates to Albert Park on Linthorpe Road.

As Tom and Stan has both served with the Green Howards they knew each other from regularly meeting at regimental gatherings and coincidentally Stan’s son lives just 20 yards from Tom’s son – Brian’s father – and they too get on very well.

Brian added: “A statue would be a fitting tribute to commemorate the centenary of Middlesbrough’s first Victoria Cross medal.

“‘Hero’ is a word that’s bandied about often nowadays but my grandfather was a hero in the truest sense because he sacrificed his life for others.”