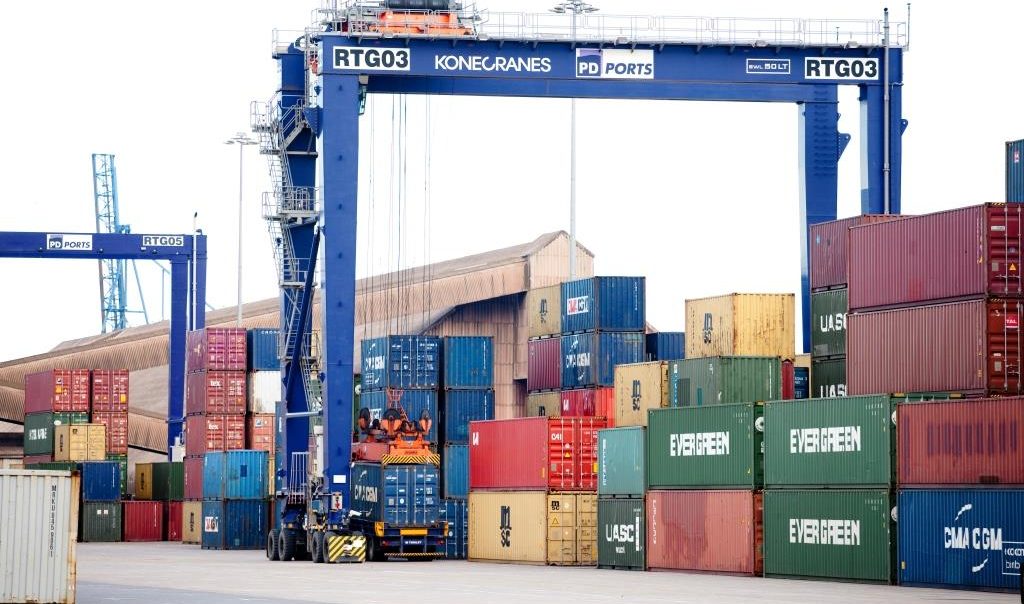 PD Ports has significantly increased the volume of containers it can handle at Teesport with the installation of new multi-million pound cranes, offering global shipping lines direct access to UK Northern markets.

As part of its continued growth, £3.2m has been invested in three 24.6m tall rubber tyre gantry cranes (RTGs) which each weigh 141 tonnes and can lift containers weighing up to 40 tonnes and stack them five-high.

The new cranes join an additional four RTGs which have been operational since the expansion of Teesport Container Terminal 2 in 2011.

Manufactured by Liebherr Container Cranes at its factories in Ireland and Spain, they were transported in several sections by sea.

To further increase capacity at Teesport and position it as market leader in UK port logistics, an order worth more than £6m has also been placed with Liebherr for a ship to shore crane at Teesport to complement the two already in operation.

It will improve capacity as well as customer service by enabling a quicker turnaround of vessels and has up to 99.6 per cent availability during actual vessel operation, thereby ensuring reliability and productivity.

PD Ports, which owns and operates the North’s second largest container port, has also increased its capacity through a recent £35m redevelopment offering some 550m of deep water quay and providing one of the deepest water facilities in the UK.

David Robinson, PD Ports’ Chief Executive Officer, commented: “We’ve invested over £80m at Teesport over the past five years in developing, upgrading and enhancing capacity to meet the demands of our customers and position the Port as the northern gateway for containerised goods serving Northern UK markets.

“As Teesport continues to thrive in the container market, we must ensure the Port will have the right infrastructure and equipment to help provide shippers with more direct and efficient trade routes to northern markets.

“The addition of these cranes at Teesport provides a platform for further significant growth and ensures we continue to be a key driver and enabler of the Northern Powerhouse Strategy. Our continued investment in the Port will ensure it is fit for purpose to create new opportunities, attract inward investment and support sustainable growth across the North.”

He added: “This multi-million pound investment has been an important addition to our wider growth plans at Teesport, and its pivotal role in driving Government plans to rebalance trade through the Northern Powerhouse movement. Ultimately this will provide more direct and efficient routes to market for Northern importers and exporters.”