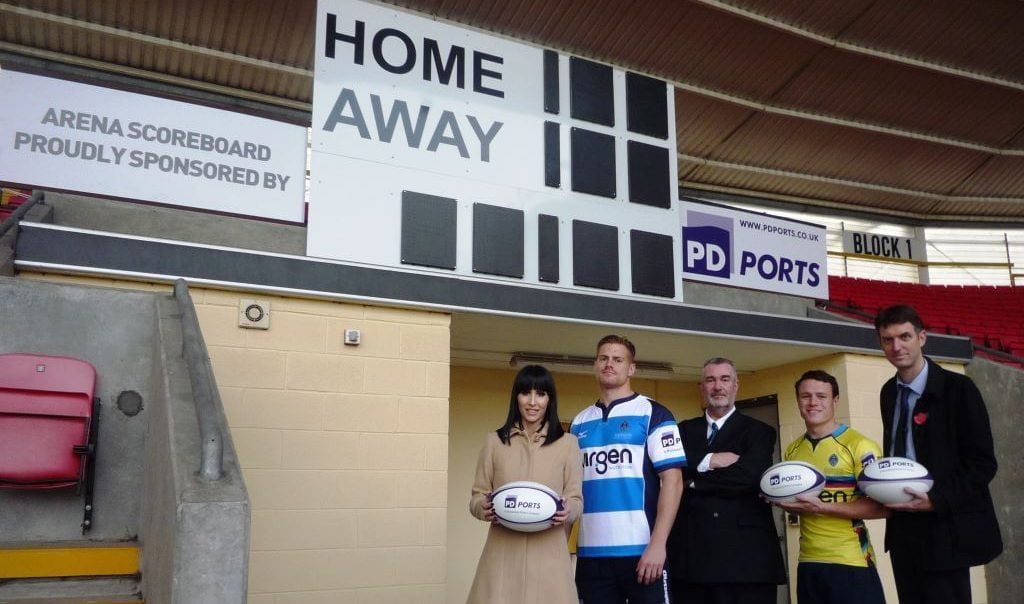 PD Ports is delighted to have renewed its partnership with Darlington Mowden Park RFC.

The deal means the Middlesbrough based Ports and Logistics Company, who own and operate Teesport, will sponsor Mowden’s first team over the next two seasons.

The company will stand alongside principle club sponsors Virgen, SG Petch and ESRG, in supporting the club.

The partnership will also see PD Ports sponsor the newly installed Scoreboard at the Northern Echo Arena, a welcome addition that will no doubt enhance the Match Day experience for fans.

Kirsten Donkin, PR and Communications Manager at PD Ports, said the company is proud to be supporting the club:

“We believe it is important to show support to our local teams and their communities whilst helping to raise the profile of the club and the region.

“The North East is renowned for its love of sport, which is an excellent way to bring people together, so the more people we attract to support the club’s games, the better the morale of the region and the boost to economic prosperity.”

While many of PD Ports’ employees are passionate about rugby and supporters of Mowden Park, the game against Hull Ionians on November 21st will be of particular interest as the company have their second largest operations on the Humber.

The partnership looks to take a hold of many opportunities by engaging with the local community to develop projects around the High Tide Foundation, a charity co-founded by PD Ports in 2012, to help raise aspirations and employment prospects of young people in Teesside.

PD Ports has always had staff who are heavily involved in supporting local clubs, helping to coach and mentor young players, as well as supporting various local teams through staff support schemes.

At least one of its staff members is helping as a volunteer member of The Pack at the Rugby World Cup.

Andrew McGreevy, Sponsorship & Events Manager at Darlington Mowden Park RFC, said: “We are thrilled to have PD Ports as part of the Mowden Family for the next two years. Together as corporate partners, we aim to use match days to build relationships and promote the club across the region and beyond.

“PD Ports came on board halfway through last season. To have signed them up on an extended deal that now sees their logo placed on the Pro Team shirt sleeve and on the newly installed scoreboard at the Arena is a real testament to the value that businesses place in being associated with Mowden Park.

“Community is core to Darlington Mowden Park RFC and PD Ports embodies much of what Mowden Park is trying to achieve in the region, so we are delighted they have bought into our vision and are providing such fantastic support to help achieve the club’s strategic objectives.”

Further information can be found at www.mowdenpark.com and the arena can be contacted by either email: info@mowdenpark.com or telephone: 01325 350267