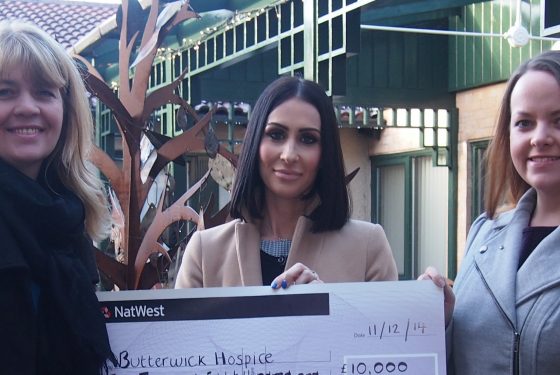 Over £10,000 has been raised by Middlesbrough-based PD Ports in support of the Butterwick Hospice.

The money was raised following this year’s Great North Run, one of the world’s largest half marathons, which saw more than 20 port employees take part. This is the third consecutive year PD Ports staff have braved the 13.1 mile race in support of the Hospice.

With sponsorship from the runners’ friends and families as well as donations from PD Ports’ customers and suppliers the team raised almost £10K.

For over three years, PD Ports has supported the Teesside-based charity through fundraising as well as taking part in many Hospice events. During this time the company has raised tens of thousands of pounds in support of the invaluable work they undertake.

Kirsten Donkin, PR and Communications Manager at PD Ports, commented: “Unfortunately, at some point in our lives many of us will rely on precious services like those provided by the Butterwick Hospice. On-going support through fundraising is vital to the Hospice’s existence and at PD Ports we are very proud to play our part.

“I am delighted to see that the team have managed to raise almost £10,000 through their hard work and dedication. Everyone that took part in the Great North Run showed tremendous strength and determination. I’d like to thank everyone for their participation.”

Patricia Boynton, Corporate Partnership Executive at Butterwick Hospice, said: “This is an amazing effort from the team at PD Ports. We pride ourselves on creating strong relationships with local businesses and are pleased that PD Ports have given us such continued support throughout the years.”