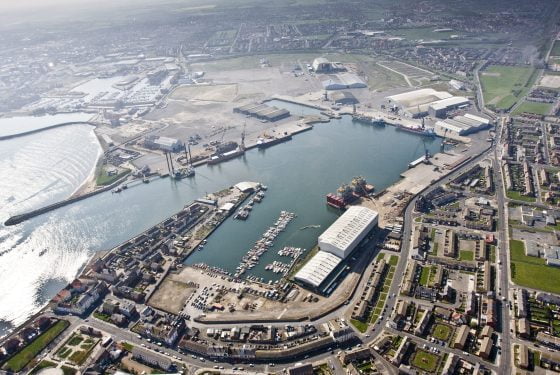 PD Ports has been appointed as the main construction logistics hub at the Port of Hartlepool for the Teesside Offshore Windfarm Project.

Over the next seven months, the Port of Hartlepool will be the focal point for all materials and components to be installed in the new wind farm being developed by EDF Energy Renewables.

Over 100 people are involved in the offshore construction programme and will be operating out of the project supply base established at Hartlepool.

The turbines for the new wind farm will be supplied by Siemens. Van Oord UK, a Sustainable EPC and Marine Contractor, will supply and install the turbine foundations and sub-sea cables and will manage the installation operations for the turbines.

The extensive available land bank and deep water at the Port are fundamental components in the delivery of the project, providing dedicated assembly areas for the massive structures with direct access to the North Sea. PD Ports will also supply stevedoring support services to assist the loading of components onto vessels which are then taken out to site, some 1.5km off the shore of Redcar on the north east coast.

Van Oord’s decision to operate out of Hartlepool is a boost for the port operator’s Chain Reaction Initiative which launched in 2010 with the aim of positioning the Port of Hartlepool and the wider region as a centre of excellence for the European wind energy market.

Paul Barker, PD Ports’ development director, bulks and ports, said: “We are delighted to be appointed as the main construction logistics hub for the Teesside Windfarm Project at Hartlepool. This project, which will deliver 27 wind turbines and produce enough green energy to power 40,000 north east households, is the first physical output of the Chain Reaction Initiative and an excellent result for the region.”

Tim Bland, EDF Energy Renewables’ project manager for Teesside Offshore Windfarm, said: “This is an exciting but very demanding project and we are working closely with PD Ports to ensure that the work proceeds according to plan. An offshore wind farm requires much closer integration of design, construction and materials supply activities than an onshore wind farm because of the additional challenges of operating at sea and the vagaries of the weather.

“The supply base established at Hartlepool is therefore central to our construction programme.”

The first wind turbine is expected to be fitted by late summer 2012 with electricity being generated from the wind farm by early autumn.