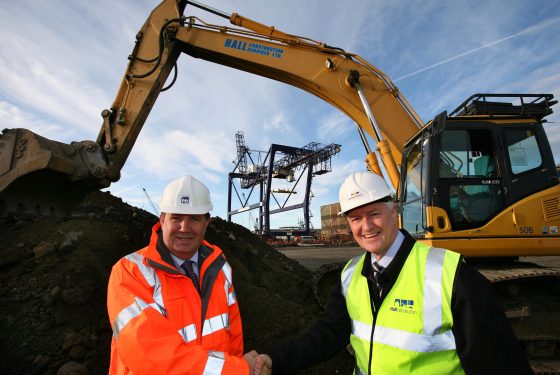 PD Ports has commenced the ground works at its Teesport container handling facilities on the North East coast, as part of a multi million pound expansion project.

County Durham based, Hall Construction Services Limited, successfully won the tender to carry out the civil works at Teesport, which are expected to be completed by late autumn. The works involve the complete reconstruction of over five hectares of terminal area with new heavy duty paving designed to withstand the increased loads from the container stacks and the new cranes, which are also being purchased as part of the project.

This is the first phase of expanding Teesport’s container terminal capacity to 450,000 TEU (Twenty Foot Equivalent Unit), from its current capacity of 235,000 TEU – an investment of over £15M. Subsequent phases will be investigated subject to volume growth and market stability. The port’s overall strategy is to expand port wide capacity, including RoRo traffic, to at least 650,000 TEU, which will position Teesport as a major player in the container market.

“We are delighted to see this expansion project moving forward. This latest investment, which will potentially involve some £29M of total investment, signifies a long term commitment to our unitised business, on the back of major growth opportunities. This will further improve performance and productivity for the port’s growing number of customers,” stated David Robinson, PD Ports’ Group chief executive officer.

“We are delighted to have won this prestigious project, which continues our long standing relationship with PD Ports going back over 20 years. We look forward to providing a first class facility as part of the ongoing investment at the port, which will create around 60 construction jobs during the course of the project,” added Stephen Hall, Hall Construction Services Ltd’s managing director.

In January PD Ports announced a year on year growth in excess of 45 percent at the Teesport container terminals, adding that port bosses expected to see this growth continue to climb in 2011 as its container handling expansion plans took shape. This latest investment is expected to help position Teesport as one of the UK’s major container hubs.